The History of the Decline and Fall of the Roman Empire Vol. VI 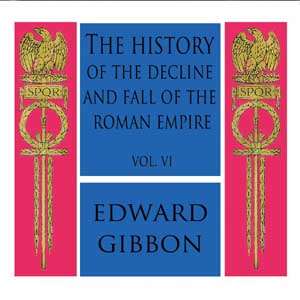 The History of the Decline and Fall of the Roman Empire Vol. VI

LibriVox recording of the sixth and final volume of The History of The Decline and Fall of the Roman Empire by Edward Gibbon. Read by Librivox volunteers.
The History of The Decline and Fall of the Roman Empire, a major literary achievement of the 18th century published in six volumes, was written by the celebrated English historian Edward Gibbon. The books cover the period of the Roman Empire after Marcus Aurelius, from just before 180 to 1453 and beyond, concluding in 1590. They take as their material the behavior and decisions that led to the decay and eventual fall of the Roman Empire in the East and West, offering an explanation for why the Roman Empire fell. Gibbon is sometimes called the first “modern historian of ancient Rome.” By virtue of its mostly objective approach and highly accurate use of reference material, Gibbon’s work was adopted as a model for the methodologies of 19th and 20th century historians. (Summary from Wikipedia)
For further information, including links to online text, reader information, RSS feeds, CD cover or other formats (if available), please go to the LibriVox catalog page for this recording.
For more free audio books or to become a volunteer reader, visit LibriVox.org. Download M4B (127MB)

Reviewer: michael jon houston - - May 11, 2021
Subject: In praise of our readers...
Good news listeners!,..If you enjoyed the first reader here, you'll be happy to know that same reader's golden voice also is to be found reading parts of "The Diary of Samuel Pepys" audio book here on Internet Archive. Have YOU heard the same voice on other audio books?, If so, please let us know so we can either go check it out, or avoid, depending on how much we enjoy listening to this distinctive voice.

Uploaded by librivoxbooks on December 31, 2008